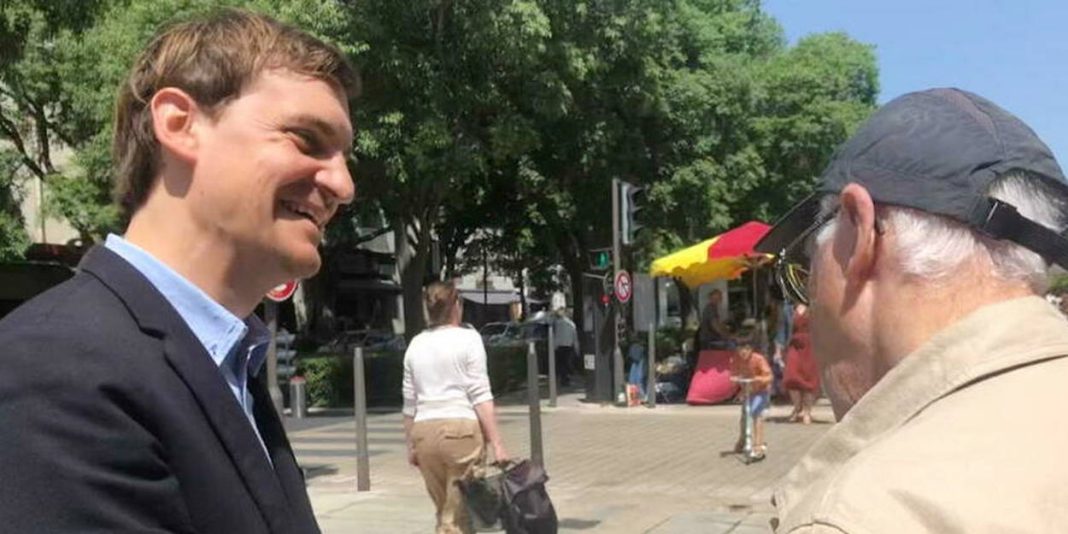 ” Vare you the environmentalist candidate? I’m from Nîmes, for bullfighting, and the anti-bullfighting activists who protest outside the Arenas, I can’t stand it! I will not vote for you. “It is not always easy for the EELV-Nupes candidate Nicolas Cadène to wear the colors of the coalition of parties, this Friday morning, on the allées Jean-Jaurès market in Nîmes. A paradoxical reproach for the former general rapporteur of the Observatory of Secularism, suppressed in the spring of 2021 by the Castex government, who has long presented himself as an aficionado. Immediately known, at the beginning of May, his investiture by EELV in the 6e riding of the Gard made the anti-bullfighting associations scream. The candidate hastened to clarify his position: “I am not going to deny my past and the local culture in which I grew up,” he tells us today. After, obviously, being invested by EELV, I will apply the decision that will be taken by the parliamentary group. »

From the PS-LREM alliance to the Nupes

A banner among others on the back of this 40-year-old media lawyer, who defines himself as “a great pragmatist”, and whom his local rivals call, it is according to, an “upstart” or an “opportunist”. His surprise designation by the national EELV bodies first caused a bronca here. The departmental PS, of which Cadène was once the number two, immediately voted on a motion to signify that it did not want a socialist to be its deputy.

“We made the choice of clarity after his participation, in 2020, in a list opposite to that of the PS,” explains Pierre Garcia, secretary of the Nîmes section. Cadène wanted to form, for the municipal elections, a list supported by the left and LREM. Then he had introduced himself on that of the business manager David Tebib. The harshest blows come today from EELV, whose head of Nîmes, Sibylle Jannekeyn, had been chosen as a candidate on the constituency by the regional authorities. “Nicolas Cadène is not at EELV, and has never worked on ecology with the associations and activists of Nîmes,” denounces Laurent Dupont, regional secretary of EELV. “Local activists experienced this as the parachuting of a Secularist Gentleman. »

“I am a pure Nîmes juice”

Parachuted, Cadene? “I am a pure juice from Nîmes! “retorts the interested party. Coming from an old Protestant family from Nîmes, the candidate is, in fact, greeted several times, on the market, by pensioners who know his cousin, his aunt or his father, a winegrower in a nearby village. Although he lived for several years between Nîmes and Paris, the Nîmois now lives full-time in his hometown with his wife, a lawyer, and their two little girls. After the closure of the Observatory, Cadène bounced back to the neighboring Hérault department, where he is deputy director of employment, labor and solidarity. A position where he oversaw the closure of the largest slum in Montpellier and now manages the reception of more than 1,000 Ukrainian refugees.

“I have been asked twice by elected officials of the national executive board of EELV,” says the candidate, who swears “not to be a childhood friend of Julien Bayou”, the national secretary of EELV. If he is “not a member of EELV”, he says “he has taken public positions on the environment for a long time”, and highlights his membership in Greenpeace. According to him, local tensions around his designation have subsided. His campaign manager is a socialist, his replacement comes from insoumise France, whose activists are negotiating with him. “And I am supported by the two elected EELV to the department in the constituency. “But several EELV and PS activists preferred to put themselves “on the back foot”. The candidate crisscrosses his vast constituency, between popular districts of Nîmes and villages, driving his “nupette”, an electric car flanked by portraits of the candidates and Jean-Luc Mélenchon.

Without a state of mind for this former socialist, who defines himself as “deeply European” and defends the program – the entire program – of the Nupes. “That of the plural left, behind Jospin, in 1997, was more radical. “If he is elected, he will be “the deputy of secularism”, and the one of the “right to die with dignity”. A subject that is dear to him, after the suicide of his grandfather. The deputy seat, currently held by a MoDem elected official, Philippe Berta, has not yet been acquired for him: in the first round of the presidential election, Marine Le Pen came first in the constituency. Two small environmentalist candidates and another from the Republican and socialist Left will compete for votes on the left, and he will compete with a young wolf LR deputy mayor of Nîmes, François Courdil. And if he succeeds? His rivals expect to see him lead a list in the upcoming municipal elections. “My priority is the legislative elections,” Mr. Secularism eludes.